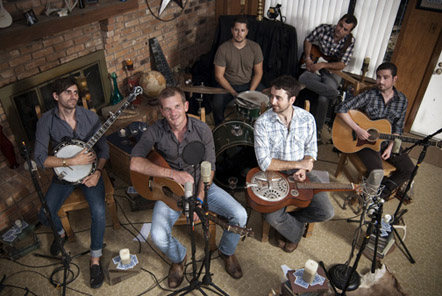 Rodney Parker & 50 Peso Reward are set to release the follow-up to last year’s The Apology Part 1 EP with a new live album appropriately entitled Live in the Living Room (through Smith Music Group). On it, the Denton, TX-based sextet touch on material from not only that EP, but also their two previous full-length studio efforts, 2005’s Blow Out The Soot and their highly-lauded 2008 release The Lonesome Dirge, as well as premiering two new songs, “Where the Bright Lights Glow Me” and “Skin and Bones.”

The album was recorded live at the band’s house with no amplification in front of an audience of about 30 friends, family and industry people. It was then later mixed on the premises, and has no post-production alterations, overdubs or studio-trickery affecting any of the performances… it’s the show exactly as it was played and heard that night. While this intimate acoustic performance is decidedly different from their explosive ‘plugged-in’ live shows that they’re renowned for, the Pesos’ musical chemistry and dynamics are still undeniably intact on this recording, not to mention that these earthier takes only solidify how remarkable these songs and Parker’s commanding voice are.

RP50PR are also currently finishing up The Apology Part 2, their third full-length due out early 2012 (also through Smith Music Group).

PRESS FOR RP50PR’S LIVE IN THE LIVING ROOM:

“Rodney Parker’s a talented songwriter who paints memorable tales of life, living, heartbreak and heartbreaking, and his plaintive voice with a touch of drawl works perfectly with his alt-country rural pop in an electric or acoustic setting. Live In The Living Room is destined to be one of my Top Ten discs of 2011.” Hal Bogerd / NO DEPRESSION

“Denton’s Rodney Parker and 50 Peso Reward recently released a live album that should be the standard for live releases. Live in the Living Room is the best recording this band has done so far. This CD is a great introduction to one of the best live bands in Texas, and one of the upcoming stars in the Texas music scene.  Get out and pick up a copy of this CD, and let the strong performance and great writing take you to Parker’s living room. If you close your eyes, you can almost feel like you are there.” – Thomas McAleer / EXAMINER: AUSTIN

“It’s often said that the true greatness of an individual song can be measured in how it holds up over the transition from plugged-in and polished studio track to a stripped-down, skeleton of it’s louder counterpart. Perhaps that’s become a cliche, but it’s especially true in the case of Parker’s brand of insurgent country. And by that measure, the Living Room versions more than survive the transition, they shine.” – THE SQUAWKER

“These songs burn like flames under straw.” – James Calemine / SWAMPLAND

“A nice little departure from the band’s typically more amped-up live sound, and a worthy means to tie over fans until their upcoming The Apology Part 2 LP hits in December.” – SUBSERVIENT EXPERIMENT

“Live In The Living Room will bring a variety of emotions to listeners during the 13 tracks that clock in at more than 53 minutes. There will be smiles, toe-tapping and maybe even some tears on songs like “The Apology” or “The Ship.” However, at the end of the set, you will probably react like the audience on the album did after the final track – which is thoughtful appreciation for Rodney Parker & 50 Peso Reward who have managed to borrow the best elements of American music, tie them up in a bow and deliver them right to your living room.” – COUNTRY CHART

“Rodney Parker and 50 Peso Reward’s new song “Skin and Bones” is heartfelt, aching and genuine. Powered by Parker’s compelling vocals and an intimate banjo, this acoustic country roots song possesses that rare, special little something that tends to hide in corners waiting for the right moment to emerge.” – ONLINE ROCK

“This raw recording gives the album an intimate feel that makes it hard not to imagine the band playing in your very own front room.” – THE MUSICAL VIEW

“Good, rollicking Texas Music… you can almost immediately get the homespun vibe of the living room by listening to this album.” – COUNTRY STANDARD TIME

Rodney Parker & 50 Peso Reward are set to unleash their second full-length effort The Lonesome Dirge on April 8th and are jumpstarting the release with an aggressive tour that will head West through the month of March before traversing the rest of the nation throughout ’08 in support of their new record.

While Parker and The Pesos found regional success in Texas on the strength of their remarkable 2004 self-released debut, Blow The Soot Out, the Denton, TX-based quintet are poised to break out nationally with The Lonesome Dirge – a breathtaking, often heart-stopping, album brimming with Americana anthems, harrowing Southern Gothic balladry and shit-kicking roadhouse rockers that channels the likes of Steve Earle, Old 97s and Son Volt.

The album immediately stampedes out of gate with the unbridled dynamics of the driving opener ”Firefight,” before shooting straight into the passionate number “10 lb Test,” where, amid indelible hooks and stinging guitar, Parker’s warm, whiskey-soaked voice sweetly cracks with a touch of wild honey. “Brother” is a moving ballad that culminates with not only proud, pounding choruses but also showcases the volatile musical dexterity of this explosive outfit, while songs such as “Wild Man From Borneo,” “Tell Me What It Is” and “I’m Never Getting Married” are performed with both fiery passion and clenched-fisted conviction. The band also manages to breathe further life into a spirited reworking of Springsteen’s “Atlantic City,” while the album’s sparse, haunting closing number “11 Hours,” coincidentally, hearkens back to the ghostly acoustic landscape of Bruce’s Nebraska album.

What these eleven-tracks – alternately capable of touching the heart and loosening the floorboards – prove more than anything else, though, is that Rodney Parker is one of those rare singer/songwriters to be reckoned with. While the word ‘masterpiece’ may seem a bit lofty to attach so readily to any record this early in an artist’s career, The Lonesome Dirge is as worthy a contender as you’re likely to find today.

PRESS FOR RP50PR’S LIVE IN THE LONESOME DIRGE:

“Denton’s Rodney Parker has one of those great alt-country voices — all gargled ashtrays and too many smoky, beery nights filtered through sandpaper. It’s in full effect through The Lonesome Dirge, Parker and his backing band Fifty Peso Reward’s sophomore album, a disc that feels like an evocation of every aimless night ever spent away from the bright lights and big city. No matter how lonely or weird it sounds at times, Parker keeps you riveted throughout.” – Fort Worth Star-Telegram

“Rodney Parker is the best new singer-songwriter I’ve heard this year. Bring on the challengers. I don’t expect him to be dethroned. “The Lonesome Dirge” will be on my list of the top ten discs of 2008.” – Hickory Wind

“If you be a fan of Old 97s, Bastard Sons of Johnny Cash and the like, the RP&50PR is your band. Hell, I even heard a little Counting Crows here and there on this divine new album, The Lonesome Dirge.” – The FineLine
“The Lonesome Dirge is an 11-song slice of country-rock brilliance that gets better with each and every listen. I can’t recommend this album — or this band — strongly enough. Rodney Parker & 50 Peso Reward is among the best our state has to offer.” – This Is Texas Music

“Parker is blessed with a set of gritty vocal cords that fits perfectly with the brilliant covers of Springsteen’s “Atlantic City” and Kinky Freedman’s “Wild Man From Borneo.” – Rootsville / Belgium

“The Lonesome Dirge is an announcement to the world that Rodney Parker & Fifty Peso Reward have chosen to fight with their music. And I can report to you that they are the winners by a knockout. These guys flat out bring it!” – Texas Music Times

“[8 out 10 stars] …an interesting sound which they infuse with vivid lyrical imagery and driving guitars, merging an urban rock sound with country undertones.” – MusicReviewer.com

“The Lonesome Dirge is an impressive effort by Parker that’s a lot country and little bit rock and roll, but is sure to appeal to a wide variety of music lovers.” – Reviews By Guild

“The Lonesome Dirge is the sort of country-rock record that’ll grace the finest roadhouse jukeboxes for years down the line.” – The Daily Utah

“Haul your ass over to the Dallas’ Granada Theater to catch RP50PR’s CD release party and enjoy a stiff shot of alt.country rock goodness.” – Twang Nation

“Whiskey-soaked vocals with moving melodies and sharp ballads give “The Lonesome Dirge” a down-home passion with heart-tugging lust appeal. The Fifty Peso Reward and their leader Rodney Parker have done such a remarkable job with their sophomore effort that they may just kick the Old 97s in the teeth.” – Smother Magazine

“Rodney Parker & 50 Peso Reward like things big (they are from Texas after all), as their version of country-fueled rock is big on hooks and big on swelling choruses.” – The Tucson Citizen

“… these guys combine elements of folk, rock, country and mash it all together with a slice of punk…. They have a nice, raw edge that you don’t see very often in the alt-country scene.” – Sell The Lie (music blog)

“Positive interaction with the crowd, a complete sound and original songwriting – that’s what makes a good show even if the product isn’t your particular style. What makes a good show great is when those elements are met, and even those pessimistic going into it are seen having the time of their lives on the dance floor.”Monday night, Jake’s Backroom hosted one of those great shows as hundreds of local residents turned out for the Rodney Parker & 50 Peso Reward/Thrift Store Cowboys / One Wolf extravaganza with high energy support from the crowd.”- The Daily Toreador

The Lonesome Dirge is simply incredible. I can’t get over how talented these guys are. They should be huge — I don’t know that they want to be, but they should be.” – This Is Texas Music

“Roots-rock as it’s meant to be.” – Hanx / The Netherlands

SEE MORE MORE PRESS ACCOLADES TO THE LEFT BELOW...