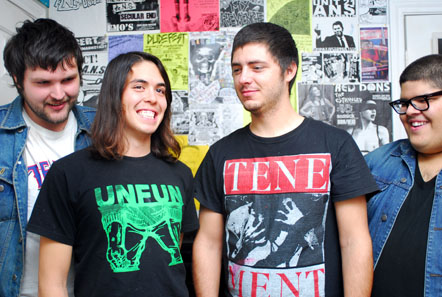 Occult Detective Club is formed by Alx Anguiano on vocals/guitars, Andrew Messer on guitars, Chris Reeves on drums and Tyler Shults on bass.

With echoes of The Jam, Boys, Clash, Sham 69 and the passion and forward thinking of Billy Bragg, on their new album Crimes, Occult Detective Club is the sound of today with a nod to the past. Taking a cue from an increasingly active underground Texas music scene, they play a mix of first wave punk and new wave music with a focus on catchy choruses, thoughtful lyrics and a DIY mentality.

The Denton, TX-based band previously released their ten-song debut LP Tortures last spring on Red Lounge Records, and fellow Texas gore-hounds Hex Dispensers covered their song “I’m A Ghost” on the B-side of one of their latest singles.

Crimes will be released on February 15th through Alive Records on CD, Digital and LTD. Edition Vinyl formats (The first vinyl pressing of 500 copies comes with free MP3 download).

CRIMES TRACK LISTING:
1. In Another Life
2. C’mon Levi
3. Up From the Underground
4. Crimes
5. Their Walls Around You
6. Our Bitter End
7. Calling the Detectives
8. Running from the Red Squad
9. One to Ten
10. Oh Bureaucracy
11. Wear the Woodwork
12. Young Lovers

HERE’S WHAT PEOPLE HAVE BEEN SAYING ABOUT OCCULT DETECTIVE CLUB’S LATEST ALBUM CRIMES:

“Digging a little below the musical tension and down into the lyrics, it quickly becomes clear that Occult Detective Club are classic punks at heart — unsatisfied with the status quo, unlucky in love, and just upset enough to pick up some guitars and bang out some tunes to tell you all about it. With such a simple, direct, and earnest approach, it’s hard not to side with these guys, taking up the cause of the disaffected and dejected in the name of good old-fashioned punk rock.” – Gregory Heaney / ALL MUSIC

“Bands like Occult Detective Club make me smile, simply for the fact that kids are still churning around in garages somewhere, spitting into microphones and playing shitty guitars.  ODC’s sophomore album, Crimes, is every bit of the three-chord wonder that we loved all those years ago. Bottom line: Crimes is awesome but not complex.  That’s how punk rock should be.  If you like Suicide Commandos (and you should), you’ll love Occult Detective Club.” – TREND ROBOT

“It’s tough coming up with anything new in punk rock that isn’t going to sound as if you were trying too hard to reinvent something that’s as basic as it gets. Occult Detective Club know this, and that’s why their sophomore effort, Crimes, works so well.”  – BOSTON PHOENIX

“I was prepared to write this one off as generic Sham 69 pump-your-fist punk, but then the words demanded to be heard and I was hooked. The main man here is Alex Anguiano, who sings like the bastard child of Win Butler and Joey Ramone (not as horrible as it sounds) and resembles Lance Hahn’s Chicano cousin and writes with a conciseness and economy of phrase that is always human. His empathy for people shines throughout. The first two tracks (including current single “C’mon Levi”) concern the tragedy that is New Orleans and dig this big crux: ‘This town’s worst can still beat where I’m from.’ Amen, brother.” – FLAGSTAFF NOISE

“Apparently Joey Ramone rose from the dead, got in touch with Denton’s best export Marked Men and asked if he could re-record their b-sides with Teenage Bottlerocket.” – MAXIMUM ROCKNROLL

“…a brash blast of frenetic punk rock. Crimes bears serious echoes of the first wave of US punk bands, with hefty shades of The Ramones in particular. It’s more than an homage to the golden age of punk, they have refined this sound to a fine art adding their own quirks and styles.” – BARRYGRUFF

“Their new album Crimes may only clock in at under 30 minutes but there’s a lot of great stuff on here.” –  Andy Turner “Zero Hour” / WMSE RADIO

“I’m reminded of high energy bands like The Ramones and Suicide Machines when I listen to them, yet there’s something even more to them that makes them original.”  – RICHMOND PLAYLIST

“The playing is tight, the production values stellar and Alx Anguiano’s vocals providing the perfect punk snarl. Crimes showcases a band understanding who they are and where they’re going and can only mean this is the beginning of greater things for this young band.” – Carl Cortez /  ASSIGNMENT X

“The 14 short, sharp shocks seething from young Lone Star state quartet OCCULT DETECTIVE CLUB’S new album Crimes make like a very welcome knife in the gut of complacency. They may be earnestly serious young men, but on Crimes they hitch up their fears and frustrations to a roaring Punk Rock juggernaut, let out the throttle and simply ram the nay-sayers off the freeway.   If you were wondering whether anger can still be an energy, just cop an earful of this amphetamine blast.” – Tim Peacock / WHISPERIN & HOLLERIN

“C’mon Levi is a busted-lip of perfect manic mod energy. I’m not sure what they got in the water down there in Denton, but Occult Detective Club look like they just smashed your mailbox and sound like they just quantum leaped (or lept?) from Queens in ‘75 or London in ‘78. Mind you, nothing fancy here, just three glorious chords, a bad attitude and probably some industrial epoxy in a brown paper bag. Weekend starts in 1! 2! 3! 4!”  – MY OLD KENTUCKY BLOG

“It’s nice to know that there are some youngsters who know good music.”  – BOING BOING

“On their new album Crimes, the marvelously named Occult Detective Club play a mix of straight-up, raw, no nonsense first wave punk and new wave music… Think the Ramones, with echoes of The Jam, even Sham 69 thrown in the blender. Check out the wonderfully frenetic C’mon Levi and start bouncing round that living room like it was 1976…” – THE MAD MACKEREL

“I can’t describe how good the music is on this… Just listen to it.” – MONKEYBEAT