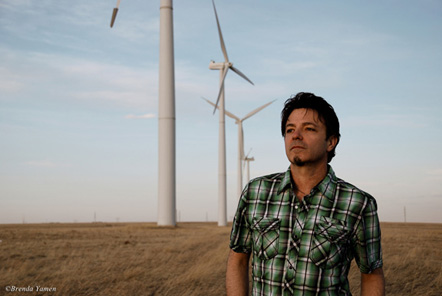 Hickman has long been known for both his guitar prowess and deft songwriting skills, with many songs leaning heavily towards the Americana/alt-country side of the fence – both in Cracker and on his 2005 solo debut, Palmhenge, which received positive accolades from the likes of revered music critic Robert Christgau, No Depression, AllMusic, Village Voice and many others. But on Tilting his musical boundaries are broader than ever before. While there are still traces of Americana present (“Measure Of A Man,” “Destiny Misspent,” “Whittled Down” and the bluesy “Resurrection Train”), there are also strains of smoky Dust Bowl-era jazz (“Papa Johnny’s Arms”) and gutsy rockers (“Takin’ Me Back” and “Another Road,” the latter which also incorporates a sweet and sublime refrain throughout). Perhaps most surprising, however, is the heavy presence of some incredibly hook-laden pop. Not only are some of these tracks reminiscent of Lennon & McCartney in their prime (“Dream Along With Me,” the satirical poke at national hubris of “Not Enough” and “Sick Cynthia Thing,” the latter which also surges with an uplifting mid-’70s glam swagger), but even the earthy folk of “Drunkard’s Epiphany” is elevated from a state of melancholy into something much more hopeful with its sunny harmonies and keen pop sensibilities.

“The songs on Tilting are definitely more personal, more autobiographical than on either Palmhenge or Cracker records. I didn’t set out to do that but it’s just where I am in life I suppose. I didn’t steer cautiously around any of my feelings or experiences, good or bad. It’s as honest as hell, I can tell you that. Lyrically, there’s a little mid-life crisis catharsis going on here, not that that’s a bad thing. That and just being pissed off and reveling in it. I also love collaborating, which I do with David as well as my long time friend Chris LeRoy. Two of the twelve songs onTilting were written by or with Chris, though the majority of these songs are directly from my head and heart.”

LISTEN TO JOHNNY’S NEW SONG “MEASURE OF A MAN” FROM TILTING:
http://soundcloud.com/pavement-pr/johnnyhickmanmeasureofaman