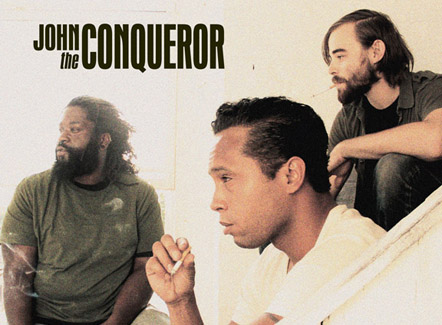 Perhaps what makes John The Conqueror so refreshing, however, is their honest, simple, yet extremely passionate approach to their music. Gardner and Moore (the latter who learned to play guitar in his early teens from a homeless man who slept in the back room of an auto repair shop) have been playing together in bands since their college days in Oxford, MS, although Gardner recently switched from bass to drums to make room for Lynn in the line-up in early 2011.

The ten expressive, unrestrained tracks featured on this effort are delivered with a youthful, reckless abandon as channeled through some truly old souls. And, not unlike the mythological African-American folk hero they’re named after, that should be enough to resonate with just about any generation.

John The Conqueror was produced by Pierre Moore and recorded in Philadelphia at Retrocity Studios & Jesse Gimbel’s Basement.