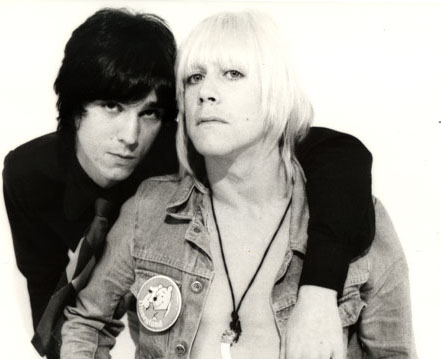 Iggy Pop and James Williamson’s newly remixed and remastered Kill City album is now available as a CD Digipak featuring the original 1977 artwork and a 24-page booklet with rare and unseen photos. The vinyl first-run is a limited edition of 1,000 on clear green vinyl (as an homage to the original 1977 pressing). There are no bonus tracks, but, with this newly restored version, people will be able to discover, or re-discover, a truly great album as it was intended to sound.

I like what this album has to say.
It is rather high concept, and the music is well thought out.
It adheres to no particular genre.
A lot of people have borrowed its ideas.
It’s one of the very first independent LPs I know of.
I hope you like it.
IGGY POP

Kill City was by all measures a desperate effort, a singularly honest and heartfelt performance, a genuine progression of our song writing, and another in a long line of flops that were later resurrected and heralded as masterpieces.
By the time it was released as a record, both Iggy and I were off doing other things with our lives, but with this rerelease we are not only reunited in our musical endeavors but in our appreciation of this album, its remix, and its importance to us as artists.
JAMES WILLIAMSON

“… a stellar remix… the album has more than its share of memorable moments, like the Stones-esque title track, the scorching “I Got Nothin'” and the eerie “Johanna.” It was previously reissued in 1992 on CD by Bomp as part of the label’s “Iguana Chronicles” series but to hear it remixed/remastered will undoubtedly be a treat for fans.” – Fred Mills /  BLURT MAGAZINE

“… a healthy dose of Stonesy sleaze and hard rock muscle. Iggy’s vocals are really the main selling point here, and he doesn’t disappoint. If you’ve bought previous versions of Kill City, chuck ’em. The new remaster on this version is a revelation, removing decades of mud and murk heard on previous CD editions, and replacing them with a new clarity that’s worth the price of admission.” – David Mansdorf / LOSING TODAY

“[Iggy’s] vocals are powerful and full-bodied, as good as anything on his solo work of the 1970s. The music is more open and bluesy than on Raw Power, and while Williamson’s guitar remains thick and powerful, here he’s willing to make room for pianos, acoustic guitars, and saxophones, and the dynamics of the arrangements suggest a more mature approach after the claustrophobia of Raw Power. The 2010 edition of Kill City sounds less like a demo and more like a proper album, and if the rough textures suited the original, the new mix honors the power of the songs, and this is the rare example of a revised mix that comes close to improving on the original… a minor triumph.”  – Mark Deming / ALL MUSIC GUIDE

“If you didn’t realize Kill City was a classic back in 1977, you sure as hell will now.” – TRANZMISSION / BOSTON

“Since the Stooges circle has been squared its only fitting that this missing link be finally, beautifully restored for posterity.” – KANSAS CITY FREE PRESS

“Though still pretty hard-edged stuff, there is a more melodic feel to this record than anything The Stooges produced, as well as a marked Stones influence on numbers like the title track and “Consolation Prizes.” Kill City is a pretty kicking album – quintessentially Seventies and full of Iggy’s unhinged histrionics and Williamsons’ powerful, intricate riffing. It also provides a clear stylistic link between the Stooges and Iggy’s later, Bowie-produced classics The Idiot and Lust For Life. Overall, a nifty, quietly excellent slice of Stooges history which a lot of people will have missed the first time.”  – Eddie Thomas / SUBBA-CULTCHA

“Kill City has been reworked to sound nearly as good as anything else from the time. As such, the street-smart rockers Pop & Williamson laid down with the help of saxophonist John Harden, drummer Brian Glascock and bassists Scott Thurston and Steve Trano finally gleam with the kind of savagery we always suspected they possessed. Though Kill City can’t match the, well, raw power of Raw Power, it slinks with the same bloodthirsty demeanor. Harden’s sax squeals between Pop’s desperate vocals and Williamson’s mean riffs. It’s the sound of crossed wires, the bridge between the blues inflections of mid-70s Stones and the Bowery-style barbarism to come just a couple years later.” – Stephen Slaybaugh / THE AGIT READER

“The new versions of the songs – now wholly re-mastered – finally let us hear Kill City as it should have been and it’s an absolute blast, fully deserving of its’ ‘lost classic’ status thirty-five years down the line. Kill City, then, finally emerges from its’ original blurry sonic cocoon to take its’ rightful place as a proto-punk classic. Its’ importance as the stepping stone between Raw Power and The Idiot is finally apparent for all to hear. And be positively thrilled by.” – Tim Peacock / WHISPERIN & HOLLERIN UK

“The CD remastering of Iggy’s great 1977 album Kill City is a reminder that his classic recordings remain light-years ahead of most of the albums from bands that acknowledge his influence today.” – Dave Luhrssen / SHEPHERD EXPRESS / MILWAUKEE

“Kill City sits proudly beside its Stooge predecessors, now making perfect sense as the album that band never did make. It’s a rare breed: A remix and re-issue with a reason.” – I-94 BAR

“… a sparkling, overdue remix and what a valuable repair! Of course, not even revitalized sound makes Kill City as astonishing as the two dozen 1972-1974 Williamson penned/played Stooges tunes extent. It still feels like what the 1975 Rolling Stones should have sounded like: simple, riotous guitar licks out of the 1956 Chuck Berry playbook back the most viral, unhinged, unsafe, demented singer since Esquerita and Jerry Lee Lewis. Rock has almost never felt, let along been, so astonishingly, brutally honest; and Kill City, finally, is remarkably affecting rock ‘n roll.” – Jack Rabid / THE BIG TAKEOVER

“Iggy Pop and James Williamson are re-releasing their 1977 classic Kill City on October 19th via Bomp Records. It’s restored, remixed and remastered, and worthy of your hard-earned dollars. It’s definitely a breath of fresh air for those that love their music honest and raw. A must listen.” – ALL KNOWING FORCE / NYC

“Beautiful reissue of an album that shows Iggy Pop in transition from the blistering atonality of The Stooges to the more pop and glam sounds that he adopted for most of his solo career. It’s a slow-burn, but a good one!” – PIRATE CAT RADIO / SAN FRANCISCO

“Kill City is rarely mentioned as the one of the great moments of Iggy’s career and it should be. Four years after Raw Power, Iggy Pop and James Williamson return with a raw, hook-filled collection of pop, rock and punk. This has seen many dubious releases on CD. None of which sounds as stunning as this new remaster, which has also been remixed. A big thumbs-up!” – BURNING WOOD TONIGHT