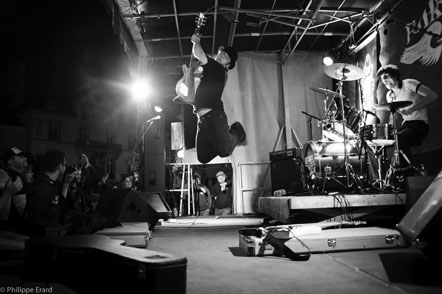 Following on the heels of their highly-praised debut Everything’s For Sale, South Wales duo Henry’s Funeral Shoe are set to unleash their second full-length effort Donkey Jacket – an album filled with the twosome’s distinctive punk-energy-blues-drenched-rock ‘n’ roll. With their incendiary guitars and hard-rock riot, fans of Radio Moscow, Left Lane Cruiser and The Black Diamond Heavies should find much to like in this explosive new release.

Comprised of brothers Aled and Brennig Clifford, this second offering evokes images of the Deep South, rather than the Welsh Valleys from which they hail.

Donkey Jacket features a number of guest appearances from a plethora of acclaimed musicians, including long time Van Morrison collaborator John ‘Ned’ Edwards on harmonica, slide guitar and mandolin, Pete Hurley of legendary ’70s Welsh band Lone Star on bass, and Justin Beynon of the Broken Vinyl Club on keys. The album was recorded in Wales with Tim Hammill at the helm, while mixing duties were undertaken by Jim Diamond (Jon Spencer Blues Explosion, The Go) in Detroit.

Taking its name from the coat worn by Welsh miners, Donkey Jacket is a collection of rousing numbers ranging from the hard-hitting “Love Is A Fever” and “Anvil & Chains,” to their contrasting softer side on acoustic-driven tracks such as “Heart on Fire” and “Across The Sky.”

Donkey Jacket comes out October 11th through Alive Naturalsound Records and will be available on CD Digipack, Digital Download and  Ltd. Edition Clear Vinyl of 700.

“Some of the loudest soulful rock’n’roll to come out the UK in a long time.”  – THE FIRE NOTE

“’Dog Scratched Ear’ can be addictive on account of just the energy it puts out. A great cut thanks to attitude, conviction, the bite of distortion, the mood of the blues, and the crunch of rock ‘n’ roll.” – MIXTAPE MUSE

“An impressive album… It’s tough for me to find a favorite song here as they’re all so good. Fans of Chilli Cold Blood, Left Lane Cruiser, Five Horse Johnson, and The Blackwater Fever are going to absolutely love this band!” – THE SODA SHOP

“I’m impressed with Henry’s Funeral Shoe: their obvious talent, their approach and certainly, this fine collection of songs.”  – WHEN YOU MOTOR AWAY