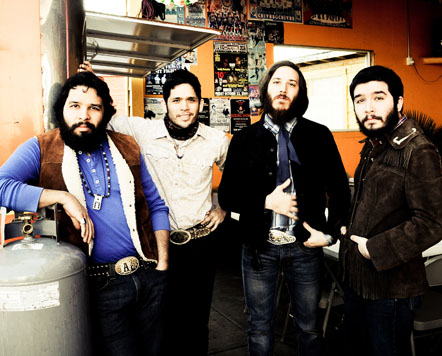 BIG RED & BARBACOA is the second album by South Texas’ HACIENDA, and like its predecessor Loud Is The Night (Alive 2008), it was produced by Dan Auerbach of The Black Keys. Recorded on the tail-end of a year playing clubs and festivals across North America, Australia and Europe (opening for Dan Auerbach and Dr. Dog, and more recently for Alberta Cross), this new album brings heavier grooves and flavor to the ’60s harmonies sound the band is known for. The result is a blend of Tex-Mex roots rock, retro-pop and R&B that can only be described as South Texas Soul. BIG RED & BARBACOA captures the attitude of a band ready to throw pretension to the roadside and play rock’n’roll the way it was intended.

[BEST OF WHAT’S NEXT – FEB. 2010] …a mix of Beach Boys-esque harmonies, classic Stax Records grooves and a guitar sound that recalls the rootsier side of ’60s pop-rock with its swirling melodies and irresistible swagger. Their forthcoming second album Big Red & Barbacoa finds them working up to a much heavier sound than that of their debut.  – PASTE MAGAZINE

“From the get-go Hacienda’s Big Red & Barbacoa sets the table with a big slice of south Tejas soul—an album that would surely make fellow Texan Doug Sahm proud. Over the course of the past two albums the band have found a sweet spot, digging their heels into sixties and seventies rock and soul, without falling prey to the kinds of retro-pastiche traps often associated with such. Make no mistake–this is a band in the here and now.“ – JUSTIN GAGE / AQUARIUM DRUNKARD

“Like the classic combo it’s named after, Hacienda’s latest album is a hunk of comfort food, golden-age rock ’n’ roll delivered with no irony and only minimal modern embellishment. The Black Keys’ Dan Auerbach takes production and engineering credit here, but he’s smart enough to keep any embellishments so low-key he seems like a nonentity, maintaining the illusion of a really excellent four-track recorded live in the studio. Skilled, studied rock revivalists like Hacienda make it increasingly harder to distinguish “old-fashioned” from “timeless,” but some things taste too good to tamper with.” — JEREMY MARTIN / SAN ANTONIO CURRENT

This one’s a game changer, folks. Their time on the road with Auerbach has paid off. “Big Red and Barbacoa” is a complete effort from a band that has found their sound. At least for now. The members look young and will hopefully have plenty of time to expand their palate. Right now, their sound is firmly anchored on the vintage side while never stooping to imitation. Some of their influences are obvious enough. Beach Boys harmonies abound, and I can’t imagine a band from San Antonio being unaware of the Sir Douglas Quintet. They tackle the Everly’s “Your My Girl” to great effect too. But the Hacienda sound is something new. The evidence of their musical taste is comforting, but the future of this band should not be confined to retro rock and soul. They’re too good at what they do to get stuck in someone else’s shoes. They can burn your barn down with a song like “Mama’s Cookin,” then smooth you out with an instrumental like “Big Red.” And they’ll take you everywhere in between. Listening to this record is like sliding into your favorite jeans. You know how they’re gonna feel and you can’t wait to put them on, and then you find a $20 bill in your pocket that completely takes you by surprise. Right now, “I Keep Waiting” is the $20 surprise on this record for me. But I feel like this is a truly great album, and in time I suspect that every one of the songs on “Big Red” will have been my favorite at some point. There’s nothing on here that doesn’t work. The reverb, the hand claps, the organ, the guitar solos, the bells. It’s all been done before, but never like this. I’m glad it’s happening now. – Jason Crawford / Home Theatre & High Fidelity

“Damn if these guys don’t have 1965-1970 down cold. Owing more to the Beach Boys and fake British Invader Doug Sahm than BBQ-infused honky tonk, and ably guided by producer/Black Key Dan Auerbach, Hacienda are capable of making the sunshine pour through your speakers with their warm vibe and glowing harmonies. It’s a dizzying, winning recipe that the Villanuevas have cooked up on Big Red and Barbacoa by a band that’s clearly in love with rock ‘n’ roll—no matter when it was released—and the sounds of summer.” – POPMATTERS

“The San Antonio family band’s latest takes a hard turn toward the border with the proto-punk Chicano soul of opener “Who’s Heart Are You Breaking,” Tex-Mex waltz “Got to Get Back Home,” and the fiery rockabilly of “Mama’s Cookin.” Recalling original Texas Tornado Doug Sahm, the quartet unlocks a groover’s paradise, reiterated by the riptide instrumentals that close out each vinyl side.” – AUSTIN POWELL / AUSTIN CHRONICLE

“Sweet new one from C & D faves Hacienda—three well-dressed harmonizin’ Texan brothers and a cousin, whose second album, “Big Red & Barbacoa” is out from Alive Records on vinyl and the digital. Like their debut, it’s produced by Dan Auerbach of The Black Keys.” – ARTHUR MAGAZINE

“Those who caught January’s Alberta Cross show at Muddy Waters Café may remember Hacienda, who annihilated their opening slot with a thumping fury of blues rock riffs and Southern swagger. And now that the guys are touting a new disk (the recently released Big Red & Barbacoa), I have no doubt they’ll bring the same intensity back for round two.”  – THE SANTA BARBARA INDEPENDENT

“Hacienda’s sound is a fusion of roots rock, Americana and straight-up rock ‘n’ roll. The songs feature harmony vocals, solid backbeat and soulful guitar/keys interplay. “Big Red & Barbacoa” is a tougher, more rocking record than “Loud Is the Night”… and works as a complete project, like albums did in the glory days of vinyl records.” – JIM BEAL JR. / SAN ANTONIO EXPRESS NEWS

“[BEST OF WHAT’S NEXT – FEB. 2010] …a mix of Beach Boys-esque harmonies, classic Stax Records grooves and a guitar sound that recalls the rootsier side of ’60s pop-rock with its swirling melodies and irresistible swagger. Their forthcoming second album Big Red & Barbacoa finds them working up to a much heavier sound than that of their debut.”  – PASTE MAGAZINE

“As Doug Sahm and Augie Meyers once did, these newer bands are also using bleating organ riffs to glue the funkiness of conjunto R&B to the pop glories of ‘60s rock’n’roll.” – GEOFFREY HIMES / SONIC BOOMERS

“Among the most intriguing aspects of this San Antonio quartet’s second album is that you’re never quite sure what you’re listening to. Is it taking cues from early rock? California production pop? Stax soul? Tex-Mex? Neo-psychedelic grunge? The answer is ‘yes’ to all.  You can hear Sgt. Pepper’s-era Beatles in the guitars, the somber mood of Johnny Cash in the vocals, and the teenage energy of mid-60s go-go rock in the rhythms. As an added treat, several of the tracks are produced in punchy AM-ready mono and the album is available on vinyl!” – NO DEPRESSION

“What if the Beach Boys or those cats in Coldplay had made their music while sweating in the South Texas sun? Maybe they would’ve sounded like San Antonio’s Hacienda, who blend Tex-Mex roots rock, retro-pop and rhythm ’n’ blues in a highly listenable manner. These soulful wranglers have just released their second album, “Big Red & Barboca,” which contains the absolutely lovely song “I Keep Waiting,” which surely was written by the late great Ritchie Valens and Buddy Holly in rock ’n’ roll heaven before they channeled it through the band.” – THE PORTLAND TRIBUNE

“Hacienda sounded precociously talented on their debut album, 2008’s Loud Is the Night, and their sophomore release, Big Red and Barbacoa, confirms that two years of touring and writing new material have only sharpened their skills. Hacienda’s fascination with the Beach Boys hasn’t faded, and they can conjure up silky, heartstring-tugging four-part harmonies while working out arrangements that would do Brian Wilson proud during his sandbox period (cue up “Hound Dog” and “I Keep Waiting”), but as songwriters Hacienda are gradually growing into a voice of their own, and these 12 tracks are noticeably tougher, stronger, and more impressive than the stuff on Loud Is the Night.” – MARK DEMING / ALL MUSIC GUIDE

“… garage-rocking beneficiaries with an endorsement from the other half of The Black Keys, Dan Auerbach.” – THE ONION / AUSTIN

“For these young men, the BEACH BOYS, LINK WRAY and the Stax/Volt soul sound loom as large in the musical galaxy as anybody with Vox gear. There’s plenty of BOOKER T. & THE MGS grooves and SIR DOUGLAS QUINTET organ thrown in there as well. Hacienda’s ability to raid the spice rack for just the right taste sets them far apart from their peers.” – MICHAEL TOLAND / THE BIG TAKEOVER

“Much like Surfer Blood and Beach House, Hacienda mine the sound of the Beach Boys’ harmonies for inspiration. Their twist is a bit of Tex-Mex meets Ennio Morricone flavor.” – KANSAS CITY PITCH

Tex-Mex was taken to a new level when Hacienda stepped on the scene with its debut disc Loud Is the Night and it didn’t hurt that The Black Keys’ Dan Auerbach was behind the boards for the battle between unforgettable harmonies and monstrous groove sessions. Nonetheless, that pattern continues with even more noticeable refinement in the chemistry between the band and its behind the scenes partner on Big Red & Barbacoa (Alive), which is just as spicy as it sounds. Part modern blues, another half garage rock and basically a kitchen sink’s worth of rhythmic variety help give the long player an unpredictable slant, but there’s still an curious cohesion that ties the tunes together. – ANDY ARGYRAKIS / HEAR/SAY MAGAZINE

Despite a decidedly vintage flair, the band is no mere reprisal of their influences; as their testosterone-fueled cover of the Everly Brothers’ “You’re My Girl,” shows, they are a shape-shifting klatch of fresh talent. – OXFORD AMERICAN

“The group has a solid garage-rock + “Beach Boys” sound to them and it certainly makes me yearn for the summer and some heat.” – MUSIC FOR PERFECT PEOPLE

“Hacienda may credit their vintage sound to the toys in Auerbach’s bat cave, but when you listen to a Hacienda record, you can easily peg a variety of musical influences. Soothing harmonies on songs like ‘I Keep Waiting’ resemble those of The Beach Boys, and carry you to that same warm safe place in the sun. Country boy roots are unearthed in the love song, “Got to Get Back Home”, a track that you could swear fell off the back of My Morning Jacket’s truck. Whatever homage you hear, Hacienda makes you feel good.” – THE WASTER

“Hacienda is a charming proposition of ragged 70s rock and heavy harmonies, recalling the easy laconic moves of The Band and The Beach Boys.” – TOO COOL TO DIE

“Big Red and Barbacoa, Hacienda’s follow-up release to 08’s Loud is the Night, adds more grit and grunge to the band’s love of ‘60s harmonies. Produced by The Black Keys’ Dan Auerbach, Big Red and Barbacoa has plenty of Beach Boys-inspired tunes (“I Keep Waiting,” “Hound Dog,” “You’re My Girl”), but also adds a heavier blues and garage rock sound to songs “Apples,” “Who’s Heart Are You Breaking Now,” and “As You Like It.” Spending the past two years touring with Auerbach as his backing band also affected the San Antonio four-piece’s own live shows and latest release. The result is a heavier rock ‘n’ roll sound that not only swoons, but can shake the walls.” – RECORD DEPT.