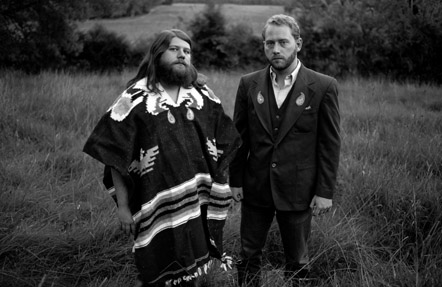 As far as Great Peacock has already come—recording a stunning debut EP of harmony-driven acoustic pop, performing as part of stylish, socially conscious eyewear company Warby-Parker’s Class Trip, and landing a coveted spot at one of Paste magazine’s 2013 SXSW showcases—the group began, almost literally, as a lark. “We kept noticing this hilarious trend of bands with names like Fleet Foxes, Deer Tick, Vulture Whale—they all had two names,” Nelson says, “one of which was always an animal.”
Kidding around one night, Nelson and Floyd decided to start a new band called Great Peacock. “I thought it was gonna be this cockamamie joke,” Nelson says. “We’ve talked a million times about starting random bands—including a Southern-rock band called Swamp Ass—and didn’t follow through. But even for a while there, when we didn’t really have anything going, I never stopped writing songs because I have to write to maintain my sanity. It’s my version of therapy. And Blount hadn’t stopped, either. Writing gave us an excuse to hang out.

Great Peacock’s harmony-driven sound appeals to fans of indie-folk, but the group is different from contemporaries like Fleet Foxes and The Head and the Heart in that their music is inextricalbly linked with the South. It’s who they are—Floyd hailing from a family of Alabama peanut farmers, and Nelson a long line of Mississippi preachers and sharecroppers. “If I had my way in life,” Nelson admits, “I’d be a country singer. My dream is to be George Jones.”

“But those country singers don’t exist any more,” Floyd says.
So instead of trying to live in a long-gone past, Great Peacock draws from the same inspirations that once fueled their now-extinct forebears (geography, aging, love/hate family relationships, blood, death, birds), channeling them into an unmistakably modern sound. For Nelson and Floyd, it’s natural, inutitive. “We know that even though there’s a history we’re connected to, we’re of our time,” Nelson says. “We know most records aren’t made on tape any more, but we’re also very much aware that—no matter the year or the production style—the right melody can be timeless.”

Great Peacock’s self-titled EP will be released on CD and digital formats on March 5, 2013 through This Is American Music. National tour dates to be announced soon!