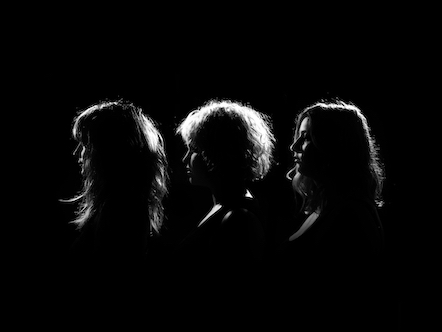 Where will you hide when the world around you is closing in? On their latest LP, An Ode To Escapism, Ghost Funk Orchestra invites you to close your eyes and take a dive into your subconscious. Strings and horns float around from ear to ear while their three sirens explore themes of isolation, fear of the unknown, and the fabrication of self-image. It’s a soulful psychedelic journey that picks up sonically where A Song For Paul left off. The drums are heavier, the arrangements are more intricate, and the vocal harmonies soar over a bed of odd time signature grooves. This is an album that’s meant to be listened to in the dark. So won’t you join them? You’re not scared… are you?

Ghost Funk Orchestra are a mystery. Plain and simple. Dirty, soulful production, verbed and fuzzed out guitars, mysterious vocals that feel like a lost score to a Quentin Tarantino film. GFO is the brainchild of composer/multi-instrumentalist Seth Applebaum. What started as a one-man recording project has now evolved into a 10-piece powerhouse live band. It’s a sonic kaleidoscope that defies genre specification, but draws heavy influence from the worlds of soul, psych rock, salsa, and beyond. Now, coming off of their highly regarded 2019 release A Song For Paul, GFO is ready to unleash their new follow-up LP, An Ode To Escapism, to be released November 13th on Karma Chief Records.

Here’s what critics have been saying about Ghost Funk Orchestra:

“… a beam of positivity in uncertain times” – Billboard

“… a dazzling experimental jazz record….groovy, old-school-sounding with blazing horns track that harkens back to the psychedelic music of the past.” – Bandcamp

“… nails a certain sound that falls somewhere between Marvin Gaye, The Supremes, The Free Design and David Axelrod.” – BrooklynVegan

“… some of the most groovy music around.” – Earmilk

“The band forges new territory with a style full of mystery, fuzz and reverb.” – Jazziz

“… so much more than just another large-scaled soulful-funky thing.” – The Vinyl District