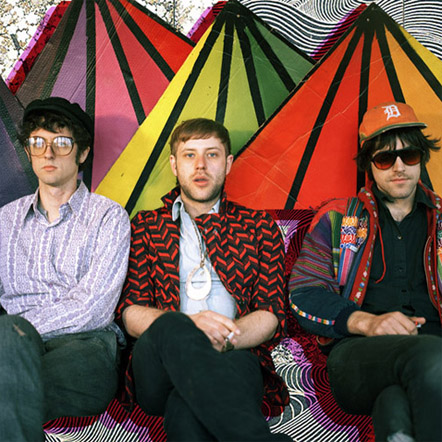 Raised on a diet of Terrence Mckenna,The Beatles, Syd Barrett, Nirvana and Turkish psychedelic music, GARDENS is part of the new sound of Detroit. Formed by Matthew Mueller, Jeffrey Thomas, Julian Spradlin and Vincent Mazzola, they have already released a couple of singles and cassettes, and toured the country, sharing the stage with the likes of Brimstone Howl, Thee Oh Sees, Detroit Cobras, Akron Family and Tyvek, to name just a few. GARDENS is their debut album, produced and engineered by Chris Koltay (Akron Family, Dirtbombs, SSM) at High Bias recordings.

”Gardens, a wonderfully psychedelic band from sorrowful Detroit, make crunchy guitar rock that has all the grit and attitude of their hometown.”  – RCRD LBL

“A solid set of high-octane garage that’s unexpectedly good. It’s a vintage sound – listening to this makes me want to dig out my Pebbles compilations – but whereas so many contemporary bands trying to recapture that 60’s vibe sound forced, Gardens are truly in the spirit of it all; wonky, exuberant and above all, varied. No two songs sound alike, with changes of pace and style aplenty. There’s a real sense that Gardens are striving to push their own musical limits and are doing it for the enjoyment of making music, regardless of retro / revisionary trends. – Christopher Nosnibor / WHISPERIN & HOLLERIN / UK

“An engaging listen… Gardens ends up being pretty much all you need from a debut; an attempt to find a unique sound, a handful of sticky tunes, a bunch of energy and fun.”  – Tim Sendra / ALL MUSIC

“This is the manna for which garage junkies live. Gardens loves the sound of dirty-unto-naughtiness guitars so well, it indulges in them often. Vocals rival the adolescent swagger of Richard Hell and Rick Froberg.” – Mary Leary / MY OLD KENTUCKY BLOG

“There are obvious nods in the direction of Syd Barrett, Velvet Underground and The Beatles but this is their own take on a quite familiar psychedelic rock sound.” – BARRYGRUFF / UK

“With jangly guitars and off-key vocals Gardens make it work… the melodies are simple, the tunes are catchy in a subtle way and it all combines together for some fun songs” – MAXIMUM ROCKNROLL

“ Gardens are the latest in the long line of garage bands to come swaggering out of Detroit – and they don’t let the side down. ‘Maze Time’ is the advance track from their forthcoming self-titled debut album and it is a cracker. While in some ways it feels like it could easily have been plucked from the halcyon days of 60s psychedelia with its bluesy feel and swirling chorus lines, there are also traces of early 70s punk attitude and even a soupçon of Motown style sweetness as well. Put those ingredients all together with wit and imagination as the band most certainly have done and the final result gives the song enough identity to stand-up and snarl all on its own” – THE MAD MACKEREL

“It’s hard to believe that this band is from the 21st century. The guitars, drums and vocals hit with grit and attitude that gleans influence from great bands of the 60’s and 70’s, such as The Beatles and The Stooges. The shifting structure of the record reinforces the psychedelic, unique, punk-rock sounds that Gardens so effortlessly create.”  – Laura Williams / THE MUSICAL VIEW

“It’s bluesy guitar rock that is at times as sugary as Motown, at others as aggressive as Iggy Pop.”  – BLOOD, DIRT & ANGELS