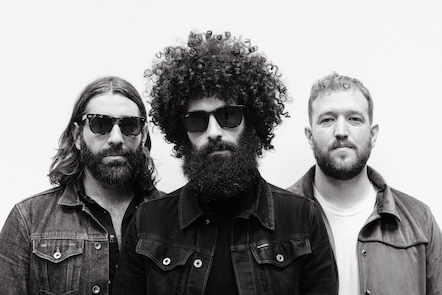 GA-20’S NEW STUDIO ALBUM “CRACKDOWN” JUST DEBUTED AT THE #1 SPOT ON BILLBOARD’S BLUES ALBUMS CHART THIS WEEK (SEP. 19, 2022)! THIS IS THEIR THIRD CONSECUTIVE RELEASE THAT HAS TOPPED THIS CHART!

IN ADDITION, THE BLUES TRIO’S “CRACKDOWN” LP IS #1 THIS WEEK ON THE NACC TOP 30 BLUES CHART! 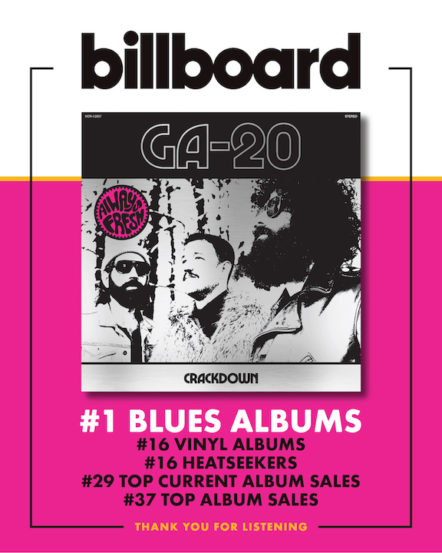 GA-20 clearly is on to something big. It’s a movement, a new traditional blues revival. The dynamic, throwback blues trio are disciples of the place where traditional blues, country and rock ‘n’ roll intersect. “We make records that we would want to listen to,” says guitarist Matt Stubbs. “It’s our take on the song-based traditional electric blues we love.” Stubbs, guitarist/vocalist Pat Faherty, and drummer Tim Carman have been at the forefront of this traditional blues revival since they first formed in 2018. It’s no wonder they skyrocketed to the top of the Billboard Blues Chart.

According to Stubbs, “Since we started the band we’ve focused on the story, the melody, and on creating a mood. Playing live as much as we do, we’re finding more and more that people are discovering how cool it all is. Traditional country, soul and funk music have all had these massive recent revivals, but traditional blues so far has not.” With their new Colemine album, Crackdown, and an intensive tour schedule, that’s all about to change.

On Crackdown, GA-20’s third full-length release, the band creates an unvarnished, ramshackle blues that is at once traditional and refreshingly modern. Expanding on their previous releases (2019’s Lonely Soul and 2021’s Try It…You Might Like It! GA-20 Does Hound Dog Taylor) GA-20 finds inspiration on the edges of the genre, where early electric blues first converged with country and rock ‘n’ roll. The album’s nine original songs include the loping, Louisiana-flavored “Dry Run,” the dirty, and bare-bones “Easy On The Eyes” and the melodic, garage-tinged “Fairweather Friend.” With tight, propulsive performances and a brevity and punk energy reminiscent of The Ramones, Crackdown is rowdy and fun, filled with instantly memorable, and well-crafted songs.

GA-20’s Crackdown is out now on vinyl, CD and digital/streaming platforms via Karma Chief Records. Click here to order. 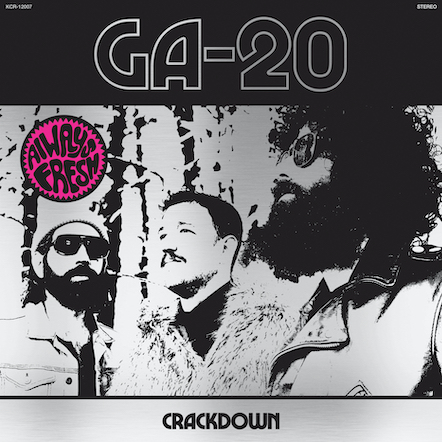 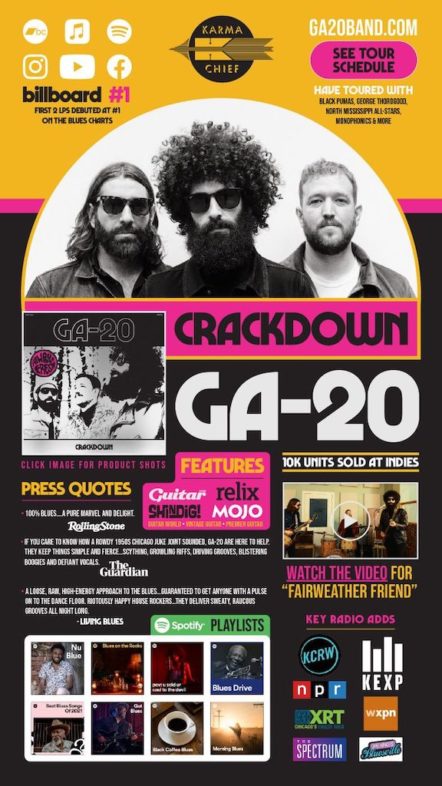 Blues music is revered for its timelessness. The best blues – no matter how old – sounds as fresh and visceral today as it did when first recorded. The high-energy electric blues trio GA-20 – guitarist Matt Stubbs, guitarist/vocalist Pat Faherty, and drummer Tim Carman – know this well. Since first forming in 2018, GA-20 has drawn inspiration for their primal, original music from late 1950s/early 1960s blues, R&B and rock ‘n’ roll. They use rare and vintage gear (including at times the famed Gibson GA-20 amplifier for which the band is named), creating powerfully raw, driving music that is at once traditional and refreshingly modern. The band’s dynamic self-penned songs sound and feel as fresh and real as the old blues they love and perform, including songs by Otis Rush, J.B. Lenoir, Howlin’ Wolf, Junior Wells and especially their favorite, Hound Dog Taylor. According to Stubbs, “Not enough people know just how cool Hound Dog Taylor was.”

Legendary six-fingered Chicago bluesman Theodore Roosevelt “Hound Dog” Taylor always knew how he wanted to be remembered, declaring, “When I die they’ll say, ‘he couldn’t play shit, but he sure made it sound good!’” His first full length recording in 1971 was also the first album on now world-famous Alligator Records, Hound Dog Taylor & The HouseRockers. In fact, label president Bruce Iglauer founded Alligator for the sole purpose of recording and releasing that album. Fifty years later, Hound Dog Taylor & The HouseRockers is considered a classic of the genre, and Alligator boasts a catalog of over 350 blues and roots rock releases. With Taylor on wild slide guitar, Brewer Phillips picking out the bass notes on his beat-up Telecaster guitar, and Ted Harvey driving the beat at breakneck speed, the band – playing their second-hand instruments through third-hand amps – made a loud, fast and joyful noise. Famed critic Robert Christgau referred to them as “the Ramones of the blues.” At the time, Iglauer figured, “If I love this band and this music so much, everyone else will love them too.”

Now, Colemine Records – working in partnership with Alligator Records – will release GA-20’s new full-length album, GA-20 Does Hound Dog Taylor: Try It…You Might Like It!, featuring 10 songs written or performed by the Chicago blues legend. From the fiery first single and album opener She’s Gone to the blistering Sadie to the all-time Hound Dog classic Give Me Back My Wig, GA-20 deliver one electrifying track after another. According to Stubbs, “We feel a strong connection to the unique setup of two guitars and drums with no bass, and we all have massive appreciation of Hound Dog’s raw and no-frills sound. It’s essentially what we try to do as a band.” 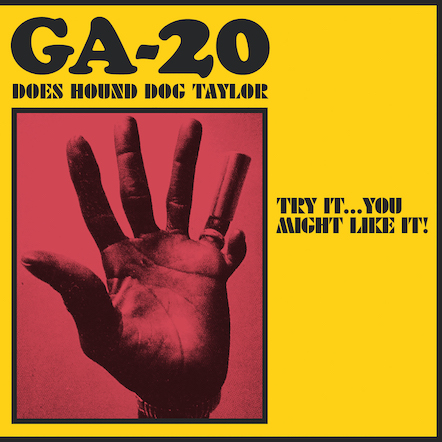 With 2021 marking the 50th anniversary of both Alligator Records and Hound Dog Taylor & The HouseRockers, the timing for GA-20 to record these songs seemed perfect. With the pandemic shutdown and tour dates postponed, the band was ready for something new. As fate would have it, Iglauer, not knowing the band was under exclusive contract, approached Stubbs about a potential project with Alligator. Since GA-20 was already committed to Colemine, the idea to work together with Alligator on this album was born. Alligator continues its 50th anniversary celebration by working with GA-20 and Colemine Records to present a new album of Hound Dog Taylor’s music, while the band gives their fans some of the most raw and honest performances imaginable with Try It…You Might Like It!

According to Colemine Records owner Terry Cole, Try It…You Might Like It! is a natural fit for both labels. “Teaming up with Alligator for this release feels like a perfect pairing! Alligator was created to give Hound Dog Taylor a home, and over the last 50 years, the label has established itself as a perennial winner in the blues world. With GA-20, we’re really excited about applying some of the old-school production techniques found on most of our soul records to the blues genre. Using just a few mics and recording live, all together in one room, is really what makes so many classic blues, soul, and R&B records so special!”

Alligator’s Iglauer is thrilled to be working with the band. “GA-20 absolutely glory in the rough-edged, unvarnished Chicago blues of Hound Dog Taylor & The HouseRockers. GA-20 are among the very few artists who have captured the band’s raw essence. Hound Dog would be proud that they are delivering his music so well. They rock the house!”

Heading into the recording session for Try It…You Might Like It!, the plan was to keep everything as true to the way Hound Dog recorded as possible. Stubbs spoke to Iglauer on several occasions to get info on those early sessions and for the details of the guitars and amps that Hound Dog and Brewer used. Stubbs explains, “Pat and I searched out four 1960’s Teisco/Kingston guitars to find the one with the closest tone to Hound Dog’s original, and Pat used a vintage 1960’s Silvertone amp – the same as Hound Dog. I used a vintage Telecaster and vintage Fender amp like Brewer Phillips played.” They tracked the songs in under two days, live, all in one room, and in no more than three takes per song, just as Hound Dog Taylor & The HouseRockers did. Stubbs continues, “Our essential goal was to capture the spirit and vibe of Hound Dog Taylor & The HouseRockers and (Hound Dog’s second album) Natural Boogie, and I believe we did just that.”

According to Stubbs, “Some music is more than just music, it comes with a feeling. To me, Hound Dog was raw and visceral, and all of these things that really appeal to me and that I try to bring to my own approach on guitar. It was an exciting challenge to try to embody that on this record, in playing and production.” Guitarist Faherty agrees, saying, “Hound Dog is everything I want to be in blues. No one else today even comes close.” And Carman still can’t get enough of that drum sound. “In my opinion, Ted Harvey is one of the most underrated and underappreciated drummers of all time. I learned a lot from studying Harvey’s playing, especially the way he interacted with Brewer and Hound Dog while still maintaining a driving groove. His ride cymbal playing was one of a kind.”

Matt Stubbs is a 12-year veteran (and still a member) of blues master Charlie Musselwhite’s touring band. He’s performed with James Cotton and John Hammond, among many others. Faherty played rock and metal guitar until he was bitten by the blues bug. The two met in Boston, and their mutual love of traditional electric blues, R&B, and rock ‘n’ roll led them to write, perform and eventually record their modern vision of this life-altering music. Upon forming in 2018, GA-20 quickly began to draw a following, and the band soon signed with acclaimed soul/R&B label Colemine Records, releasing their debut, Lonely Soul, in 2019 to widespread critical and popular acclaim. The album premiered in the #2 position on the Billboard Blues Chart. Their EP Live Vol. 1 seemingly came out of nowhere to debut at #1 a year later. Medium.com declared, “This is the kind of music that travels through time while taking from the era where it was born and turning it into something fresh. Dirty and raw…timeless and modern.”

GA-20 hit the road hard, performing live at every opportunity, earning new fans at every club, concert hall and festival they played from coast to coast. Now with GA-20 Does Hound Dog Taylor: Try It…You Might Like It!, GA-20 unleashes this timeless, down and dirty music, making it breathe and live as forcefully today as it did back when Hound Dog Taylor was spitting fire. Alligator’s Iglauer says, “No one made a more wonderfully glorious racket than Hound Dog, Brewer Phillips and Ted Harvey.” GA-20 certainly comes close, as the racket made by Matt Stubbs, Pat Faherty and Tim Carman is also pretty damn glorious. “Ultimately,” says Stubbs, “we think Hound Dog fans and blues fans will love this record, and we’re proud to bring his sound to a new audience.” – Marc Lipkin 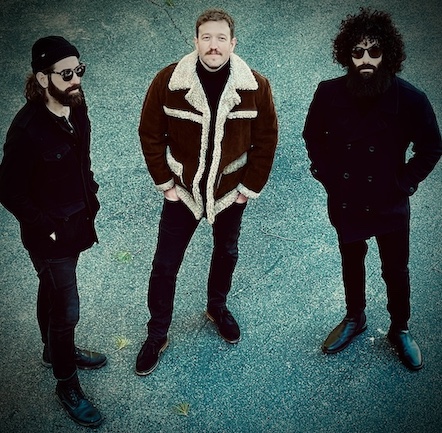 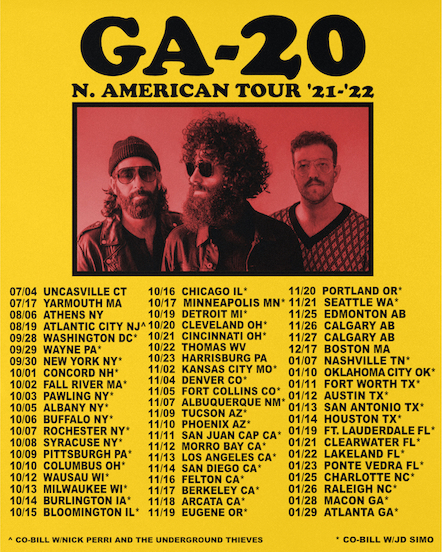 CLICK HERE TO LISTEN TO THE FULL ALBUM VIA SPOTIFY 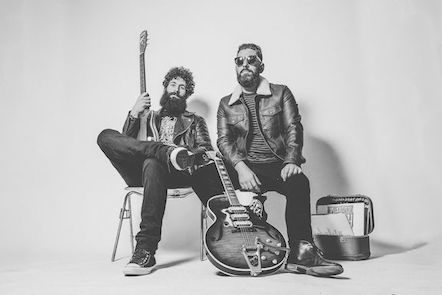 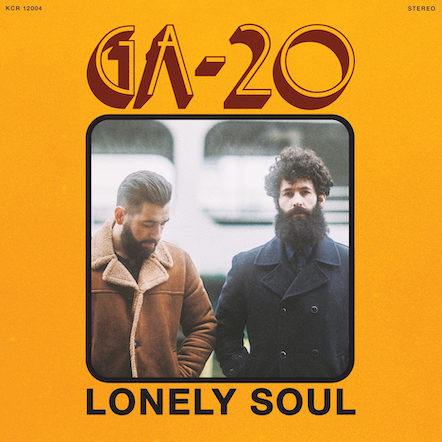 FOR MORE INFO ON GA-20:
http://www.facebook.com/GA20blues