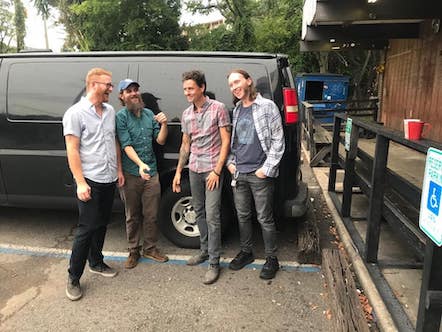 Hailing from Tuscaloosa, Alabama the Dexateens have built an institution from their fiery brand of punk and roll. Since 1998, as one line-up or another, they’ve left jaws agape and arms akimbo as if some kind of inadvertent hypnotism has occurred. Their first two releases, a self-titled southern punk masterpiece lovingly known as “Headphones” and their sophomore effort Red Dust Rising both came out on the legendary Estrus Records label.

Since then the band has amassed an impressive discography penned largely by bandleader Elliott McPherson. 2009’s Singlewide marks the last time songwriter and original lead guitarist John Smith worked with the band in studio. The acoustic balladry of that release along with changes to the lineup opened up fresh studio approaches while live shows remained unhinged. The sum of their parts, a bottling of rock’s essence, they keep it locked and loaded – A Voltron-esque band of brothers with several powerful conjoining pieces that can form at any time, in any variation, to wreak audible havoc on anyone and everyone within striking distance.

This past Febuary 13th the band kicked off the Drive-By Truckers’ annual Heathens Homecoming at the legendary 40 Watt Club in Athens, Georgia. The line-up was almost back to basics with founding songwriters Smith and McPherson on guitars and vocals, original bassist Matt Patton (also with DBT) and the great Brian Gosdin (2007-present) on the trap kit. This is one of the few times McPherson and Smith have played together in the past 10 years. The results are impeccable and it waves the spear for how deep the roots of “bandhood” can be – an unrehearsed recall of Smith-era highlights and less expected audibles.

Thankfully, Athens producer David Barbe (Sugar, Drive-By Truckers), had his mobile rig humming to catch this show in all its glory. The tracks were then brilliantly mixed and mastered by Barbe at his Chase Park Transduction studio. Barbe previously co-produced The Dexateens’ Hardwire Healing along with DBT’s Patterson Hood.

Dexateens, Live from Athens, GA – Heathens Homecoming 2020 is a Cornelius Chapel Records release, and it will be a Bandcamp only release made available on July 3rd. Easter eggs include Andy Griffith and craftily inserted Jimmy Page solos to name just a few! A phenomenal representation of barebones rock’n’roll.