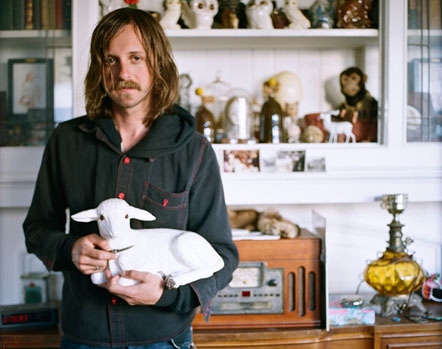 DEVOTIONALS is the new solo project by Tyson Vogel of TWO GALLANTS.
Devotionals’ music is based around Tyson’s guitar compositions, with Anton Patzner (Judgement Day, Bright Eyes) invigorating the musical space with his violin mastery, and they are joined by various guests and collaborators. The result is a unique combination of simplicity and raw emotion that will delight new and old fans of Two Gallants, a kind of street music with nods to Rachmaninov and John Fahey. The recording is entirely analog.

Destruction, breakdowns, heartache, heart attack, these songs and their process, born out of a darkness, are the representations of the light that is inherent in the blindest of moments. Unrequited Life has been congesting my every silent moment, every living heartbeat, every waking; it tore me apart in dreams or when at the corner store buying soap to clean the only thing that I had left – these sounds are a devotion, a meditation, to the only truly consistent pulse we can depend upon while alive… our own pregnant breathe. – Tyson Vogel

“Devotionals is the name of both Vogel’s project and the album, which just came out and finds the drummer moving to the front with a guitar in service of gorgeous, mostly instrumental songs aided by great strings.” – SAN FRANCISICO WEEKLY

“The self-titled debut from Devotionals, out now on Alive Naturalsound Records, brings together Tyson Vogel’s finger-picked, Fahey-esque ragas with Anton Patzner’s mournful violin (plus various guests/collaborators) to create a sound that is a bit like a less dirty, Dirty Three. Where Dirty Three’s often wild cacophony sounds like that moment when an already out of control party goes off the rails in a crash of emotions unfettered by inebriation, Devotionals’ subdued  musical confessionals play like the conversation that comes the day after – a conversation that provides context for things that were said and done after way too many that is languid and honest and not trying to impress the listener with lofty insights into the human condition. And like a conversation born from such raw emotion, these songs simply want to tell a story, and it is in this simplicity that they offer true insight. Ultimately, Devotionals deliver timeless testimonials and minimalist morning-after confessions for those days of warm beer and cold comfort.” – LOS GRILLOS / SAN FRANCISCO

“I was struck by how Devotionals’ compositions channeled the players’ prodigious talents into a moving, transcendent energy. “Chest Like Expansive Wings” is from their self-titled album, out earlier this week on Alive Records, and it showcases Vogel’s fingerpicking and Patzner’s violin intertwining vibrantly.” –  THE BAY BRIDGED / SAN FRANCISCO

“Tyson Vogel of Two Gallants joins forces with Anton Patzner (Judgment Day, Bright Eyes) for the Devotionals project and we’re all better for it. Vogul’s folks-y, backwoods compositions drenched in deep thoughts and whiskey are the perfect companion to Patzner’s violin prowess.” – THE OWL MAG

“Devotionals is for the most part Anton Patzner (Judgment Day), Jeff Blair, and Tyson Vogel. Based around the guitar compositions of the latter, Anton invigorates the space with his inspired form of violin mastery and intuition, Jeff percussive sensitivity and heart. Giving a nod of reverence to what has come before in forms of Rachmaninov to John Fahey, to the unknown echos of the street musician, these songs, in form mostly instrumental, represent only the beat of the heart, and the ache to understand.” – METRO ACTIVE / SAN JOSE