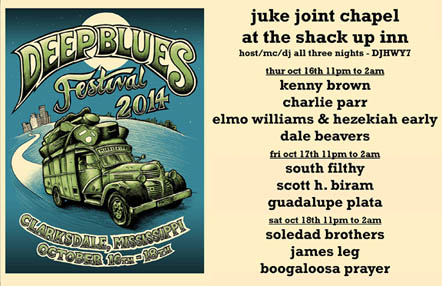 DEEP BLUES FESTIVAL 2014 MOVES DOWN SOUTH TO THE CRADLE OF THE BLUES THIS OCTOBER!

THREE-DAY FEST IN CLARKSDALE, MS TO FEATURE SPECIAL REUNIONS FROM SOLEDAD BROTHERS & SOUTH FILTHY, ALONG WITH MANY OTHER GREAT DEEP BLUES ACTS!

CLICK HERE TO LISTEN TO THE DEEP BLUES FESTIVAL 2014 PLAYLIST FEATURING ALL OF THIS YEARS PERFORMERS!

Seven years after Chris Johnson started his first official Deep Blues Festival in the Twin Cities, the fest organizer and owner/operator of Bayport BBQ in Bayport, MN is moving the fest to Clarksdale, MS for three days in October.

This year’s fest won’t be limited to just this venue and these acts, however, as it will continue to grow right up to its October residency, with many other Clarksdale venues and blues acts to be added. These new additions will be announced over the coming months as they’re confirmed.

Johnson, a passionate fan of Deep Blues music, gives an insight on how the fest originally took root, “The first official festival was August 2007 with 18 bands. It was on a golf course driving range just outside the Twin Cities. The summer before, I had a block party in my neighborhood with Scott H. Biram and the Black Diamond Heavies performing. I had done this type of thing each summer for years, and it was Scott that suggested I rent a room and have tickets so I didn’t have to pay for it all myself.  I thought that sounded like a good idea, and thought I might have a few bands and make a night of it. I wrote to 18 bands and asked if they were interested and every one replied immediately that they wanted in. I couldn’t say no to anyone, so that’s how we ended up with an all day event.”

“I really like the opportunity to share all these outsider bands with new fans,” Johnson admits. “Once people hear them, they’re hooked. All these bands should be so much more popular. I think the whole world should know their music. The two reunion events of South Filthy and the Soledad Brothers this year are very special. Also, the return of Scott H. Biram to the Deep Blues Festival is very special to me personally. I consider him to be the epitome of deep blues or punk blues.”

Johnson is also doing something a bit different this year, as he’s asking for “benefactors” to help fund the fest with $100 donations. All benefactors will also receive perks, such as the first opportunity to reserve rooms at the Shack Up Inn, along with guaranteed admission to the late night shows at the Chapel. “We’ve been fortunate to have many generous fans already make these contributions,” Johnson said. “I’d say we’re about a third of the way there already.”

“As with all of the Deep Blues Festivals, we anticipate fans and bands to join us from all over the world,” Johnson said. “Hope you’ll think about joining us too.”

FOR MORE INFO ON THE DEEP BLUES FESTIVAL 2014:
http://deepbluesfest.com
https://www.facebook.com/deepbluesfest

FOR MORE INFO ABOUT BECOMING A BENEFACTOR OF THE DEEP BLUES FESTIVAL CONTACT:
Chris Johnson: bayportbbq@comcast.net