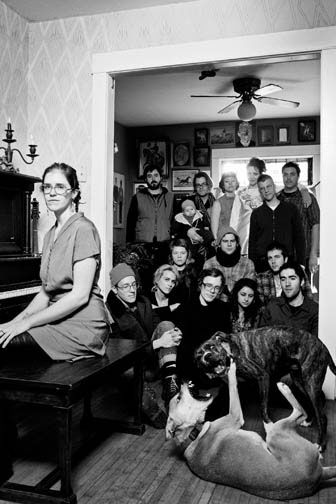 On March 9, Dark Dark Dark releases the stunning six-song EP Bright Bright Bright on Supply and Demand Music. Hailing from New Orleans, New York and Minneapolis, the chamber-folk sextet have yielded a lush and intoxicating follow-up to their 2008 full-length debut, The Snow Magic. The band has also unveiled their new website, www.brightbrightbright.com, where you can listen to the entire EP and pre-order it in both digital and 12″ vinyl formats.

On the new record the band moves beyond lost love, heartache and loneliness toward more hopeful horizons. “These songs are about new beginnings, and usually have a little triumphant twist in them,” says band member Marshall LaCount. “The songs are often about a character finding a place in the world, and the strange interactions that happen along the way.”

The EP is also about finding and creating beauty. “Lyrically we’ve grown,” says LaCount. “We’re working on the new songs the way a painter might work. Each of us adds a different shade or texture to the canvas.” The resulting songs are expansive and dynamic, layered with serious overtones but with joy at the center.

After a successful run opening for the band WHY? last fall, Dark Dark Dark recorded the new EP at Sacred Heart Studios in a former church overlooking Lake Superior, and worked with Minneapolis producer Tom Herbers (WHY?, Low, Retribution Gospel Choir, The Jayhawks, Fog). Herbers engineered, produced and mixed Bright Bright Bright on analog equipment from start to finish. He encouraged the band to record live as opposed to tracking instruments separately, taking advantage of the band’s unique chemistry and using the chapel’s natural reverb to amplify the power of their live performances. LaCount explains, “Recording like this allowed so much room for musicality, warmth and energy. It’s the most honest way we’ve ever worked.”

Bright Bright Bright also features new additions to the band, resulting in a much fuller and melodic sound.  Multi-instrumentalist Walt McClements, of the New Orleans bands Why Are We Building Such a Big Ship and Panorama Jazz Band plays trumpet, accordion and piano. Brett Bullion, a member of the Minneapolis outfit Tarlton, adds percussion.

Dark Dark Dark is currently recording new material for their sophomore album (due Fall of 2010) at the historic Music Box Theatre in Minneapolis with Tom Herbers again producing. Once completed, the band will tour in support of the EP, beginning with three SXSW showcases in Austin this March.

“The band’s acoustic lineup (piano, accordion, string bass, banjo, etc.) and lead singer Nona Marie Invie’s smoky vocals combined with a penchant for styles like sea chanties and lyrics that seemed to take place anywhere from the 1880’s through the 1920’s,  gave their [first] album an old-timey, Americana feel. Their style hasn’t changed much on the new EP, Bright Bright Bright, but as befitting the title, the mood has definitely lightened… as they add some new shades to their sound.” – POPMATTERS

“Every once in awhile a band comes along that is truly impossible to classify. Dark Dark Dark blend Americana, Gothic Cabaret and European-folk-fusion so seamlessly within each song that you feel as if you are traveling through space and time inside the melodies. This is music so beautiful that it rattles you to your very core.” – L’ETOILE MAGAZINE

“I find few artists that as chillingly or effectively as Dark Dark Dark inspire such a weighty mindset with such equal parts light and dark approach, utilizing song instrumentation smacking of authenticity, narrative strategy, and some really fucking sweet vocal manhandling. ….their songs are grounded in a really refreshing devotion to a precisely executed, eclectic cocktail of Bal Musete Jazz, the occasional hint of blues and both the tone and the narrative nature of Appalachia.” – COKE MACHINE GLOW

“Between the haunting piano and the stark vocals of Nona Marie Invie (who could be thought of as an even quirkier, darker Regina Spektor) they’ve created a folk-inspired chamber pop sound that I haven’t been able to stop listening to…” – GAPER’S BLOCK / CHICAGO

“…melancholic and alluring…. moving in every respect.” – THE MINNESOTA DAILY

“… chamber pop of the post-Decemberists variety, with dueling (and sometimes harmonizing) vocals from main contributors Nona Marie Invie and Marshall LaCount. The new EP at times betrays the New Orleans roots of utility player Walt McClements by going in a jazz direction, but maintains the airy calm throughout that at times recalls bands like Destroyer.” – PITTSBURGH CITY PAPER

“Dark Dark Dark are a band of stunning emotional insight.” – DROWNED IN SOUND

“It’s vivid stuff; as Nona sings, you can see the scene unfold right in

front of you.” – PROVIDENCE PHOENIX

“…some of the most magnificent combinations of sounds and lyrics I have ever heard. This is authenicity personified. Dark Dark Dark’s Bright Bright Bright proves that even in the darkest chambers of your heart, there is enough light to find your way.” – INDIE MUSIC UNIVERSE

“Explore a unique genre of music with Dark Dark Dark, a four-member band that’s played everywhere from basements and bars to warehouses and street corners. Through an array of instruments such as the accordion and banjo, their music references the travels of wandering musicians, with a mix of alternative and folk showing up on their latest album, Bright Bright Bright.” – CHARLESTON MAGAZINE

“Using the natural acoustics of an accordion, stand-up bass, banjo and cello, [Dark Dark Dark] definitely knows how to find the touches of beauty in life’s little miseries and heartaches.” – RICHMOND STYLE WEEKLY

“Dark Dark Dark is a band that finds comfort in the melancholic beauty that surrounds us all. Each vignette that passes proves to be as captivating or as enthralling as the last. What you come to realize though is that every composition on this release is a splendid reminder of what it’s like to feel human and share that with everyone around you.” – RVA MAGAZINE / RICHMOND, VA

“Demonstrating that the lush songwriting of their debut was no fluke, ‘Bright Bright Bright’ is an enthralling release.” – CLASH MUSIC / UK

“Whatever the future holds for the band, Bright Bright Bright is filled with confident, fully-developed songs that are at once intimate and expansive, and represent a group that is focused intently on exploring both the peaks and depths of their own inspiration. The tracks have a thoroughly original spirit and style that gives them a fresh, modern sound. But there is also a timeless aura to their music that wouldn’t seem out of place wafting out of the cafes of Montmartre, and that only adds to their appeal.” – THE LINE OF BEST FIT / UK

9/ 10 – “ Accordions and almost Piaf-like vocals seem to whisk one away to early 20th century Europe. Fresh, interesting and deserves our attention. Keep an eye on these guys.” – INDIE ROCK REVIEWS

“Call them whatever you want, but don’t lump Minneapolis chamber folk band Dark Dark Dark in with any other accordion-wielding act. There’s a lot more to focus on in this sextet, like their melodic orchestral arrangements or their bespectacled lead singer Nona Marie Invie, whose dark-roast voice is as rich as it is stimulating.“ – STAR TRIBUNE / MINNEAPOLIS

“This unplugged chamber-folk sextet will appeal to those who like Beirut (the band, that is, not the bomb-torn Middle Eastern city).” – THE GUARDIAN / UK

“I find myself listening over and over, each time finding, and feeling, something different. I cannot pigeonhole Bright Bright Bright. It is closer to a personal experience than a genre of music.” – THE RIPPLE EFFECT

“Austere in its simplicity and beauty, with an undercurrent of piano-and-cello-driven anguish bubbling up in multi-part harmonies.” – MINNEAPOLIS F***ING ROCKS

“…full of ghosts and beautifully mysterious.” – LA IS THE NEW NY

“Art and atmosphere” – NO DEPRESSION

“The six piece effort conjure up sounds of melodic adventures…full of ghostly vocals accordions, banjos and strings. Keep a watchful ear, this bands buzz will continue to grow.” – CAFÉ MAROON

“Bright Bright Bright”, is lush, historical, dark, and beautiful.  At times they sound like a slower, folkier version of The Arcade Fire, other times like a poppier, lighter version of Beirut.  I’d be surprised if most folks didn’t find something to like here, it is simply well-made, well-thought-out music.  The vinyl sounds beautiful, the cover art is great, it’s an all-around winner.” – OMG VINYL

“As the name suggests, the band’s new EP, Bright Bright Bright has an air of optimism, and, of course, brightness that was missing from their first album…and the change works. There is a lightness about it that whisks you away as you listen.” – THE NEEDLE & THE GROOVE / ROANOKE, VA