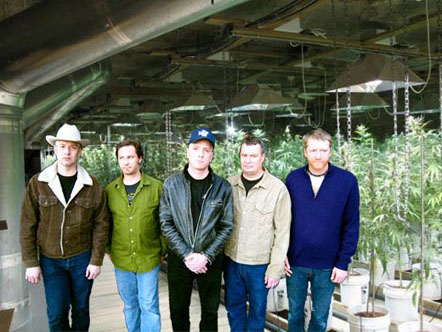 This June marks not only the 25th anniversary of the influential rock band Camper Van Beethoven, but also, in many ways, indie music itself – a genre that this Santa Cruz-based band unwittingly (or perhaps wittingly) helped spearhead in the early ‘80s long before the terms alternative or indie became common hyphen fodder for the word ‘rock.’

Popular Songs features eighteen of Camper Van Beethoven’s most beloved genre-mutating tracks that span from their groundbreaking 1985 debut Telephone Free Landslide Victory to their 1989 effort Key Lime Pie. These songs retrace the band’s broad, and often eclectic influences – from punk rock (“Club Med Sucks”) and ska (“Border Ska”) to Eastern European flavored instrumentals (“Skinhead Stomp”) and two-step country (“Sad Lover’s Waltz”) to their own whirling dervish of psychedelic pop (“Circles”). Also included are the early college radio favorites “The Day Lassie Went To The Moon,” “Good Guys & Bad Guys” and, perhaps their most well known number, “Take The Skinheads Bowling,” which is still a staple at alternative, college and rock radio to this day. Fans of Michael Moore’s controversial 2002 film Bowling For Columbine are also surely familiar with this track as Teenage Fanclub’s version of it was featured as the movie’s title track.

This collection also features five songs from CVB’s critically acclaimed albums on Virgin Records – 1988’s Our Beloved Revolutionary Sweetheart and 1989’s Key Lime Pie. However, after the band tried to buy back the rights to the original masters for inclusion on Popular Songs, Virgin refused. So CVB have faithfully re-recorded these five tracks for this collection and, in doing so, have not only reclaimed their own music but have given a stiff middle finger to their former label in the process.