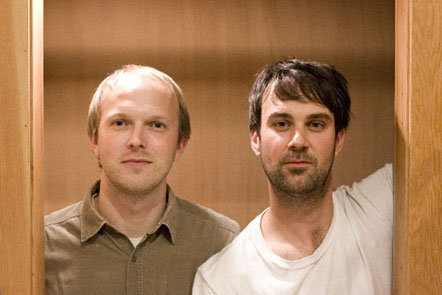 While some of you may be aware of Portland’s Joggers, it would not be surprising if you haven’t heard about the band before the band, Cajun Gems. Well, let’s drop some knowledge on you…

Back in 2000, Ben Whitesides and Darrell Bourque decided they wanted to start a band, and with the limited resources they had at the time, tracked and recorded the album Richard Byrd At Little America in their basement. The band hand-screened 100 CD-R’s, self promoted the album, and only played a handful of shows before going on to form Joggers. Now, remixed and remastered by Rob Oberdorfer, Partisan Records is pleased to be reissuing this remarkable, yet largely overlooked full-length album from Cajun Gems in MP3 and Lossless digital formats on December 7th.

“It was recorded so long ago,” Whitesides recently admitted, “and even though a lot of the songs seem pretty rough to me now, I’m happy that they’re out there; it was definitely one of those weird little bubbles of time when life felt jury-rigged and feral and all the more dire and fun for it.”

“[PORTLAND POP PERFECTION] One of the great lost—ahem—gems of Portland music history has finally been recovered. Cajun Gems’ 2001 disc, Richard Byrd at Little America, is nothing short of a basement masterpiece that deserves a place next to Elliott Smith’s Roman Candle, Bugskull’s Phantasies and Senseitions and the Thermals’ More Parts Per Million on the Great Wall of Lo-Fi Portland Musical Achievements. Yes, it’s that good.
The idea of remastering this disc seems almost sacrilegious, as its crunchy, squashed fidelity is almost as integral to the project as its quizzical lyrics and finger-picked guitar lines. But Rob Oberdorfer took lots of care in his update—cranking and clarifying Whitesides’ vocals and widening the stereo channels without losing the dirty, near-perfect heart of the project.” – Casey Jarman / WILLAMETTE WEEK