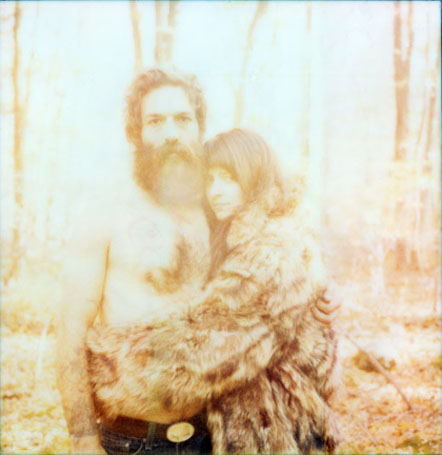 Brown Bird has a tendency towards the dark side. Pulling from the influences of the blues, outlaw country, roots rock, early American folk, Gypsy and Eastern European music, they offer harmonized voices, haunting lyrics and diverse rhythm and instrumentation, which surges in waves that often swell into high-spirited, foot-stomping madness.

Since the 2009 release of their fourth album, The Devil Dancing, Brown Bird has toured extensively in the US, and supported The Low Anthem on tour across Europe. The duo is currently working on their fifth full-length to be released this fall, but first they will release their brand new EP, The Sound Of Ghosts. The EP is currently available for streaming or purchase directly from the band at http://brownbird.bandcamp.com , in both digital format and on a hand silkscreened CD, limited to 500 copies. The EP will be released digitally and in stores on May 10th through Supply & Demand Music.

In addition to touring both coasts this Spring in support of The Sound Of Ghosts, Brown Bird has also been invited to perform at the Virada Cultural in Sao Paulo, Brazil on April 16th, as well as the renowned Newport Folk Festival in Rhode Island on July 31st, sharing the bill with the likes of Elvis Costello, EmmyLou Harris, M. Ward, Wanda Jackson, Mavis Staples and many others. George Wein, President of the Newport Festivals Foundation, was thrilled about the mix of national and local talent, saying in the press release for the festival, “I couldn’t be prouder of our new relationship with Rhode Island’s own Alex and Ani as well as the exciting artists who have Rhode Island roots such as What Cheer? Brigade, David Wax Museum and Brown Bird.”

[EDITOR’S PICK] “David Lamb’s voice is gruff but sweet. It’s also trustworthy. So as the Brown Bird boss sings his way through the gritty dreams on The Sound of Ghosts you fall under his spell rather quickly. The four-track disc seems a bit more dynamic than previous Brown Bird outings. Now that Lamb has a bassist/fiddler, the music glistens and has more thrust.”  – THE PROVIDENCE PHOENIX

“…gothic folk rock with flecks of bluegrass and the sweet breezes of southern riverbanks.”  – SLOWCOUSTIC

“Brown Bird, is a rootsy American folk band that seems to frequent the dark side of those influences. The music can be haunting, it can have foot stomping rhythm, and its always quite beautiful.” – MUSIC SAVAGE