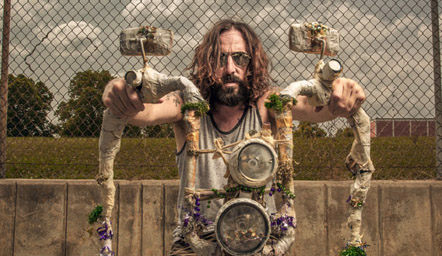 Following his two previous acclaimed solo efforts (2009’s Folk Songs Of The American Longhair & 2013’s How To Kill A Horse) Brother Dege released a unique 19-track digital-only “summer mixtape” last year entitled Scorched Earth Policy, featuring a mix of newly recorded studio songs, demos, covers and field recordings. Now Dege has updated it into a more cohesive studio album, Scorched Earth Policy: Deluxe paring down some of the rougher demos and field recordings and has added four new studio tracks to it. This is the first time any of these 12 songs will be available on CD.

Tarantino was recently interviewed on SiriusXM Radio’s show Little Steven’s Underground Garage, where he discussed all of the music track-by-track from Django Unchained. Here’s what he had to say about Brother Dege’s song “Too Old To Die Young”…“I was listening to the radio and this song (“Too Old to Die Young”) came on. And I said, ‘wow… that’s pretty damn good.’ I could see a cool ass action scene going to this. I thought it could be really, really groovy. So I had my music supervisor get me the CD. And frankly, every track on the Brother Dege CD could have been in the movie. It works and has a badass score sound to it. Almost every song [on the album] could be a theme song. It’s like a greatest hits album. But this song “Too Old to Die Young,” it’s pretty damn badass. And it’s used in the movie in a pretty damn badass way, I’ve got to say.”

The soundtrack for Django Unchained is out now.