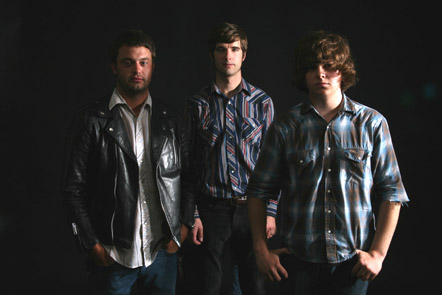 Brand new album by Lincoln, NE’s favorite garage sons, Brimstone Howl. This time the gang went to Costa Mesa, CA, to record Big Deal. What’s He Done Lately?  (the title references a quote from Johnny Ramone about Phil Spector) at The Distillery under the guidance of engineer/producer Mike McHugh (known to produce some of the most heinous, blown-out sounds this side of the galaxy, including Black Lips, Jon Spencer and Andre Williams). The result is considerably more fuzzed than their previous work with Detroit producer Jim Diamond but still pummels.

Frontman John Ziegler admits that Big Deal is thematically “a little brighter” than previous efforts, but also explains, “While our last record We Came In Peace sounded ‘big,’ the main characteristic of this album is its heat. Analog from start to finish. Recorded to tape. Mixed to tape. And from tape the wax was cut. This record sounds ‘hot’.”

The new album – Brimstone Howl’s third for Alive Records –  finds a couple of older songs (such as “Elation” and “M60” rerecorded from their debut album and first 45) riding shotgun with newer explosive tracks such as “Last Time,”  “Everybody Else Is Having Fun,” “Iota Man” and “Suicide Blues.” “Musically, our instincts remain the same as always,” Ziegler states, “but we do more pop sounding things at times, with as much drama as we can fit into our rock’n’roll template. I get the feeling that’s out of style or going out, even within our own little community of garage folks, but we’re from the Midwest and we can’t f**k around and waste our time singing songs that aren’t fully sincere. We’ve been doing music for it’s own sake for a long time now, none of us have made rent money from this, for whatever that’s worth. We have music in our hearts, goddamn it, and we always will. That will always remain the most important thing in this industry, and whatever corner of it we inhabit.”