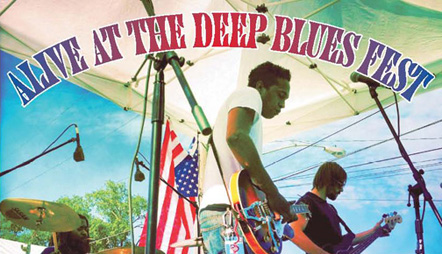 The 2012 Deep Blues Fest featured 26 bands from four countries & 16 states. Out of these acts there were seven phenomenal performances from the current Alive roster. Alive At The Deep Blues Fest is the document of these incendiary and unforgettable performances. All 13 tracks were mixed by famed Detroit producer/musician Jim Diamond, who managed to capture the loose and spontaneous feel of live albums produced in the Golden Age of rock’n’roll. Buffalo Killers and Radio Moscow turned in super heavy sets soaked in psychedelia and reverb, while Lee Bains III & The Glory Fires fiercely ripped through their show with a blistering set of songs steeped in Southern rock, R&B, soul, gospel and punk from their critically acclaimed debut LP There Is A Bomb In Gilead – an album that has been helping to define the sounds of The New South. Brian Olive and his backing band melded soulful R&B with technicolor garage-pop for their early daytime set, while the Welsh duo Henry’s Funeral Shoe, Left Lane Cruiser and newcomers John The Conqueror perhaps kept closest to the Deep Blues curriculum with their respectively raunchy and heavily amplified modern interpretations of rural gutbucket Delta Blues.

To get a sense of this intimate yet electrifying festival, grab a copy of Alive At The Deep Blues Fest, invite a bunch of good friends over for some food & drink, and PLAY IT LOUD.