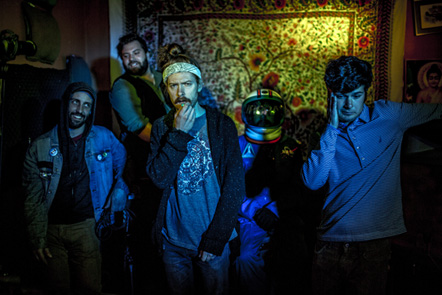 Buffalo-based psychedelic indie art rock band Aircraft make catchy pop tunes embedded with layers of thoughtful lyrics that reflect the past, present and future. Founded somewhere between time and space, Aircraft revolves around the observations of songwriter Justin John Smith. Years of experimental drug use combined with a deep interest in the mystical have created a unique take on the nature of reality that is expressed through his song craft. Lush vocal harmonies, swirling guitars (Ty Skelton), melodic bass lines (James Warren) and powerful drumming (Matt Cossman) create the perfect atmosphere for fragile vocals to float in and out of. Aircraft released their debut album Sonic Boom in 2013 receiving enthusiastic reviews and prompted a promotional tour throughout the northeast. The band is set to release their new follow-up EP 7 Gems From The Sparkling Void later this summer, seven songs that find these sonic astral adventurers setting the controls for the heart of tripped-out indie-art-pop.

Aircraft has continued to become a favored act at many regional music festivals including the Night Lights Fall Music Festival and NXNE in Toronto, and has also played in support of the likes of Thee Oh Sees, Ty Segall, Plants and Animals, Wildlife, Caveman and White Mystery.

“A melting pot of famous rock sounds, like that of Arcade Fire, Brand New and MGMT mixed together.. Almost anyone with a voice can sing along.” – 716 LOCAL MUSIC MAGAZINE