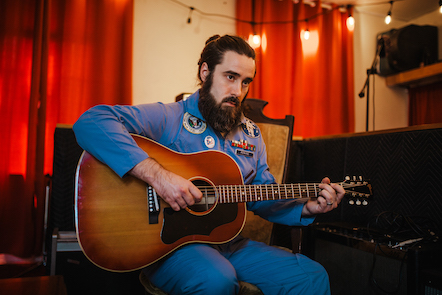 He released his self-titled debut in 2016, and this year is following with his sophomore record, E Pluribus M Ross. Today M Ross Perkins is back with his latest single from the record, “Mr. Marble Eyes (Marbles For His Eyes),” premiering with Under the Radar.

“Mr. Marble Eyes (Marbles For His Eyes)” is yet another perfect pastiche of ‘60s psychedelia and orchestral pop. Following the spacey opening, the track bounces along, carried by sunny instrumentation and indelible Beatles-esque melodies. Perkins captures the colorful pastoral feel of the era’s pop hits, distilling them with a healthy dose of trippy lyrical imagery and laid-back energy. Working exclusively from his home recording setup, Perkins crafts an expansive soundscape, escaping into the past for a few minutes of warm pop bliss.

As he explains, “I wrote ‘Mr. Marble Eyes’ at a time when I was obsessed with trying to find the most surreal and colorful late-‘60s psychedelic stuff out there. I was listening to bands like July, The Move, and Tomorrow, and all I wanted to do was write songs that were as vivid and bubbly as that stuff. So ‘Mr. Marble Eyes’ was kind of my attempt at a song like ‘Jolly Mary’ or ‘My White Bicycle.’ I wanted to tell an abstract story with two opposing characters, one representing the establishment authority and the other representing the tripping wanderer who sees through everything.”

Check out the song below. E Pluribus M Ross is out everywhere on March 18th via Colemine / Karma Chief Records.